As a most ancient and ceremonious festival celebrated for thousands of years, Spring Festival boasts a great many of exclusive customs and habits, celebration activities and traditional food which are handed down from ancestors. Though ways of celebration are different in areas more or less, there are some steadfast customs and activities practiced throughout the country. 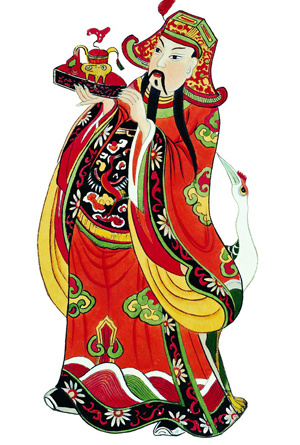 Happening about one week before the New Year' Eve, it is an oldest custom started as early as in the Antiquity Time at least 4000 years ago. For Spring Cleaning, people do a thorough sweeping of every corner and a cleaning of each appliance. According to the custom, cleaning the houses means cleaning out all the dusts as well as unlucky things, and it is considered that a clean and fresh house can bring more happiness and fortune in the coming year.

Sacrifice to the God of Kitchen (祭灶)

Nowadays, there are luxuriant decorations can be purchased in the market for Spring Festival, and people can decorate their houses as they like. However, 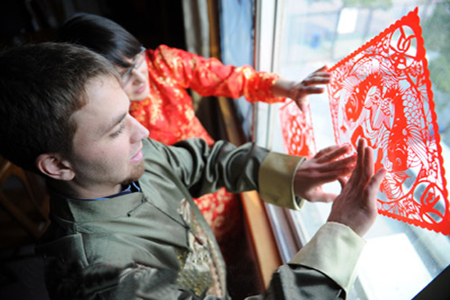 some traditional decorations are always the staples in all families, including spring couplets, the Chinese character 福 (Fu, means good fortune), window paper-cuts, Chinese New Year paintings and lanterns, the dominant hue of all are red, the color that is recognized as lucky and propitious in Chinese culture.

- Pasting Spring couplets(春联) &"福".
The custom originates from pasting a painting of a door-god on the door. Chinese people firmly believe that a door-god on the door can keep out all evils; spring couplets and the character "福" are pasted together to express people's good wishes. The contents of spring couplets are always auspicious words for prosperity; while the "福" sometimes is pasted upside down, implying the coming of the happiness because the Chinese pronunciation of "upside down" is the same as "coming".

- Pasting window paper-cut (窗花).
Paper-cut is a popular folk craftsmanship in China and often used to decorate houses during spring festival. As most of them are pasted on windows, they are called as window paper-cut. The popular themes of paper-cut are Character Fu, the God of wealth, well-known folk stories and fairy tales which reflect people's best wishes for fortune, lucky, happiness, harmony and longevity.

- Pasting Chinese New Year Paintings (年画).
New Year painting is an ancient folk art prevalent for thousands of years in China. The themes of it is rich similar to that of paper-cuts, it is also the expressions for prosperity of the coming year.

New Year painting is an ancient folk art prevalent for thousands of years in China. The themes of it is rich similar to that of paper-cuts, it is also the expressions for prosperity of the coming year.

A significant festival for family reunion, a reunion dinner (团圆饭) is the major part on New Year's Eve. On that day, all members of a big family will get together to have the dinner, a luxurious one than ever must contain chickens and fish (which has auspicious meaning in Chinese culture), and after, watch the Spring Festival Gala together on CCTV. Meanwhile, the whole family makes the dumplings, which is a midnight snack on that day. It is also a custom that people stay up late or all night on New Year's Eve, waiting for the New Year's bell at midnight, known as Shousui (守岁). It is said that seniors Shousui is cherishing their time, while young people Shuosui for their parents as Shousui can prolong the life of parents.

Set off firecrackers and fireworks

There is a popular saying among Chinese that the first thing after open the door in a new year is to set off firecrackers. The successive sounds of firecrackers are believed the cheerful happiness and good luck. Today, apart from on festivals, firecrackers and fireworks are also set off on major holidays and kinds of happy events and ceremonies.

On the first day of the New Year, people often wear new clothes, congratulate and greet relatives and friends with bows with hands folded in front and auspicious words to wish for happiness and good luck. Usually, children pay New Year's greetings to seniors will get lucky money which is believed to bring happiness and fortune to children. And married daughter visit her own parents' home usually on the second day of the New Year with gifts and accompanied by her husband and children.

Apart from family activities, various celebrations and recreational activities are hold in streets, parks and temples. People get together to have dragon dances, lion dances, yangko dances (a kind of folk dance) and kinds of programmers. Bustling temple fairs is also popular which contains colorful activities of sacrifice, recreation and shopping. Contests and garden parties are often sponsored by government, companies and enterprises, in which, everybody can participate in and every participant can get a prize in return. These contests and parties include racing, balls, riddles, and kinds of colorful small-size recreational games.

Nian Gao is a kind of rice cake normally in yellow or white, symbolizing the wealth (gold and silver); the Chinese pronunciation of Nian Gao also implies that people's life and career will be better or reach a new height year by year. Sweet is the dominant taste of Nian Gao, but some may salty made in south China. The flavors vary in different regions, red dates, red beans, mung beans, and all kinds of fruits are the general supplementary materials. Nian Gao can be eat after various cooking ways, it can be steamed, fried, stirred and boiled.

Dumpling is made of wheat flour with various stuffings such as meat, egg, seafood and all kinds of seasonal vegetables. On New Year's Eve, the whole family will make dumplings and share together. The orthodox way to eat dumpling is firstly to boil dumplings in water and dish out, and then make a sauce with soy added in vinegar, minced garlic, and seasame oil, and lastly just dip the dumpling into the sauce and a delicious dumpling is done. The dumpling is the symbol of wealth because its shape just looks like a yuanbao, a kind of money in ancient China. It is also a sign of reunion as the Chinese characters of Jiao (交, its original name) and Huo (和, the making process kneading) are both mean reunion.

Yuan Xiao, also called as Tang Yuan (汤圆) in southern areas, is a traditional food for both the first breakfast of New Year and the Lantern Festival. It is a kind of sweet dessert made of glutinous rice flour; fillings are normally the sesame and peanuts, sometimes also the vegetable or meat. It is made into round as round symbolizes the wholeness and unity in Chinese.