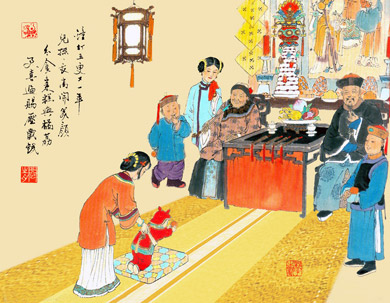 From the 23rd day of the 12th lunar month, people do extensive house cleaning in preparation for the New Year. It is thought that no cleaning can be done during the New Year's Day because it would symbolize wiping away good luck. People go shopping for decorations for their home and put up the decorations, which include paper cuts and couplets. People buy new clothes and get a haircut to symbolize starting the New Year fresh.

New Year's Eve, the last night of the lunar calendar, is time for family to get together. Virtually everyone in China returns to their home town to celebrate. The entire family cooks a large dinner of auspicious sounding dishes for the annual family reunion dinner. At midnight, it is a custom to eat Jiaozi, a type of Chinese dumpling, because the word Jiaozi is similar to the ancient word which means the new replacing the old. Also, crescent shape of the dumpling is similar to ancient Chinese silver money and the image of plates piled high with the dumplings symbolizes heaps of money for the New Year. Firecrackers are set off at midnight. This was traditionally done to scare away demons, but in modern times is a symbol of merriment.

Day One: New Year's Day (the first day of the first lunar month) Traditionally people will welcome the gods from Heaven and Earth. Ancient Chinese emperors would perform a grand ceremony at the Temple of Heaven in Beijing. Nowadays people usually get up early and pay New Year visits to their parents or neighbors. Elders give children Yasuiqian, or gifts of money. The money is put into a lovely red envelope called Hong Bao, which is usually decorated with New Year's wishes. Some Chinese might give up meat for the day. No one cleans! Cleaning on New Year's Day is serious bad luck; you might sweep all the good fortune out the door!

Day Two: Prayers to ancestors and to the gods are offered up on the second day of the New Year. It is believed that this is the birthday of all dogs, so it's better to be extra kind to dogs on this day. Son-in-laws pay a visit to their in-laws with their wives and children.

Days Three to Day Nine: Day Five: Families go out to visit relatives and friends on the fifth day. The seventh day is a special day for farmers and it is also supposed to be the birthday of all mankind. Eating noodles is a tradition. Since noodles are so long, they symbolize long life.

Day Ten to Twelve: Now that the visiting is over, it is time to invite families and friends over for dinner.

Day Thirteen:After having so many lavish meals, on the thirteenth day, people are supposed to eat simply.

Day Fourteen: On the fourteenth day, people rest from all the celebrations.

Day Fifteen: Yuan Xiao, or the Lantern Festival is celebrated on the night of the first full moon. It also marks the end of the Chinese New Year's holiday. Chinese people light lanterns, play riddle games and eat sticky rice balls. Lanterns can be found throughout China with many areas having lantern competitions. Many city parks have huge lantern displays.