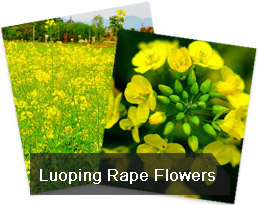 Yunnan, a supreme tourist destination for streams of travelers to experience its natural and poetic beauty throughout the four seasons, is known to all for such tourist cities as all-time warm Kunming, modern-and-ancient Dali, Tibetan-inhabited Shangri-la and Xishuangbanna of tropical flavor. More strikingly, travelers can have a pristine view of wild southwest China.

A World of Cole Flowers in Luoping County, Yunnan
Luoping, a little town on the junction of Yunnan province, Guizhou province, and Guangxi Autonomous Region, wins the acclaim as the world's largest natural garden for cole flowers. Covering approximately 533 square kilometers, the local cole flowers becomes golden sea when they are in bloom from FEBRUARY and MARCH every year. It must be a tremendous opportunity for travelers and snappers!

Have a close touch to the Nine Dragon Waterfalls in Luoping, one of six most beautiful waterfalls in China, which enjoys equal fame with the Huangguoshu Waterfall (the biggest waterfall in Asia) in Guizhou Province. 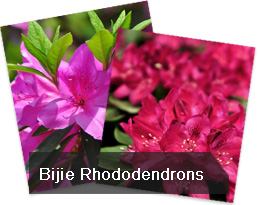 Guizhou, though is less developed, is worth visiting for those who have a liking for off-the-beaten-track tours, for Guizhou enjoys both a lively mix of ethnic minorities and a mix of caves, waterfalls and forests. Known for its Huangguoshu Falls in Anshun and Zhenshan Ethnic Village in Guiyang, Guizhou is also a world garden and the colourful belt of the globe.

Sea of Rhododendrons in Bijie City, Guizhou
Bijie city, the source of the Pearl River and Wujiang River and located on the ridge of Yunnan-Guizhou Plateau, is famous for its rhododendrons in Baili Rhododendrons Scenic Area which covers 125.8 square kilometers, and where diversified sorts of rhododendrons such as rhododendron delavayi, rhododendron irroratum, rhododendron decorum are here and there. Normally, the blossom of the flower lasts from mid March to mid May, when surrounding hills are carpeted with eye-catching flowers and tourists can grab this big chance to take photos and travel around.