2012 is moving its final step, and there is no better way to celebrate a year's achievements than start your year-end plan.

Do you want to experience something special in this festive season? Just round off your year with our best-selected destinations: Beijing, Guilin, Sanya, Hong Kong. Beijing has been the heart and soul of politics and society throughout its long history and consequently there is an unparalleled wealth of discovery to delight and intrigue travelers as they explore Beijing's ancient past and enjoy its exciting modern development. During the festive season, people can still see the great heritage sites sent out not only amazing but also festive charm, and it would be your most impressive memory in life-time. Guilin is really a place where you can make your tours all the year round and reputed as "the landscape in Guilin is the best under heaven." Definitely ranking as the province's most breathtaking scenery along with Yangshuo and the Longji Rice Terraces in Longsheng, taking on board for a Li River cruise, walking in the city's many parks and tasting the spicy rice noodles, Guilin will charm you in every way. Sanya is China's southernmost city tip in the whole country and is famous for its unique tropical weather, white sand beaches and palm trees as well as its prominent role as a harbor for exchanges with Southeast Asia. In the winter holiday season, Sanya is the best place to escape coldness. Have summer for Christmas and New Year! Hong Kong is rooted in Chinese culture, and has progressed from a Chinese society into a modern and cross-cultural international metropolis. The 5000-year Chinese cultural influents plus 150-year Sino-British history have created the unique outlook and character of Hong Kong. Also, you can involve into Discount Season.

Consider our recommendations and one of these trips could be yours. 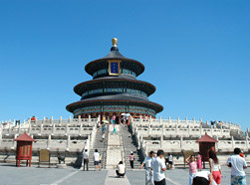 Beijing in brief Beijing, literally meaning the northern capital, is the capital of the Peoples Republic of China (PRC) commonly known as Pekin(g). Located in northern China, the municipality of Beijing is a metropolis bordering the Tianjin Municipality in the southeast and the Hebei Province in the north, west and southern parts: a size which can be compared to Belgium. Beijing is considered as China's political, cultural and international trade centre, while the modernization of the country makes Shanghai and Hong Kong increasingly dominating at an economical level. Divided in 14 urban and suburban districts, the city is now a major transportation hub to every single part of the country. Travelers coming for the first time to China canno...Details... 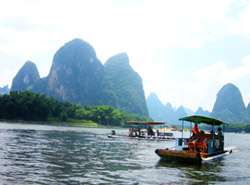 Guilin in brief Guilin, famous all over the world for its landscapes "the best under heaven", is a beautiful scenic city lying in Northeast Guangxi Zhuang Autonomous Region, South China. Situated on the west bank of the Li River (Li Jiang), Guilin, literally meaning "forest of osmanthus" in Chinese, took its name from the large number of osmanthus trees spreading out everywhere in the city. Administering 17 county-level divisions, this major top 10 tourist destination in China is known for its stunning karst topography typical of this southern part of the country. As a city celebrated for generations by poets and painters, Guilin is the place where time goes smoothly. Enjoying a monsoon humid subtropical climate, Guilin flourishes ...Details... 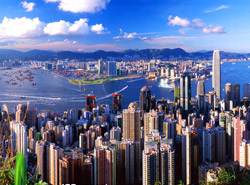 Hong Kong in brief Hong Kong, along with the famous city of Macao (Macau), is one of the Special Administrative Regions (SAR) of China, enclosed in the Pearl River Delta and the South China Sea. The city is a leading financial, economic and trade city in Asia and in the world often compared with Shanghai, New York and London. Being Britishs concession from 1842 to 1997, Hong Kong, literally meaning the Harbor of Perfumes in Chinese (Xianggang) for its past as a major trading seaport, has a history and culture mixing of past Chinese and British influences. The city comprises more than 260 outlying islands including Hong Kong Island, Kowloon, Lantau and the New Territories. Ranked as an economic, political, entertainment and shopping hub, th...Details... 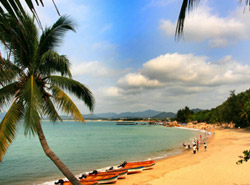 Sanya in brief Sanya, the second most populous city of the Hainan Province, is China's southernmost city tip in the whole country. The city, as well as the whole island, is famous for its unique tropical weather, white sand beaches and palm trees as well as its prominent role as a harbor for exchanges with Southeast Asia. Recently emerged as a renowned popular tourist destination, Sanya offers to travelers the opportunity of enjoying the best of itself all year long as it is possible to have a rest there, even at winter time while northerner cities are covered under a thick and beautiful blanket of snow. This destination is delightful for the one who wants to relax away from the mainland's exciting turmoil, and it may give a lot of surpris...Details...